Is it a tradition yet? It is for me. In fact, this will mark the fifth year of the one-word resolution challenge.

It took me a while to find this word. I knew what I wanted to do in 2012 — to make a profound change just to prove that one can make a profound change at midlife. I suppose I proved that four years ago, when I decided to lose weight a year in advance of my 50th birthday. I lost 17 pounds, which I‚Äôve more or less kept off. Lately, less, but the holidays will do that. But my clothes fit and I am, according to people who would know, stronger than ever, thanks to personal training¬Ýwith Todd Bauer, TRX, Pure Barre and Salvation Studio. Plus, while I may have lost seventeen pounds, I gained twenty, which I tote everywhere. 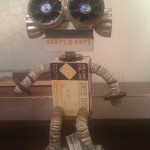 This has no relevance to the text. I just like robots.

The problem is — it has to be one word and “Change” is kind of a duh resolution. I also feel strongly that the one-word resolution has to be a verb in imperative form. (To date, mine have been: Stretch, Maintain, Venture, Be. Are all these imperative? I‚Äôd argue that they could be.) Anyway, what I want to do is hard to capture in one word. I yearn to honor my good intentions — to follow-up, follow-through. To be conscientious, to remember the little niceties. Thank-you notes, condolence cards, atta-boys. I want to be the kind of person who sends flowers and bakes casseroles and is never late with a birthday card.

I am so not that person. Which is a shame, because I was brought up by one of those people and I have a sister who is one of those people. How did I become so careless? I think, in part, it‚Äôs because my family saw my carelessness/ineptness/messiness as one of my signature characteristics. It was a given in the Lippman family that the first place to look for a missing object was under my bed. I lost things. I broke things. I was clumsy. I was sloppy.

I still lose things and, boy, it grieves me. I still break things because I‚Äôm still clumsy. I don‚Äôt think I‚Äôm particularly sloppy anymore. I‚Äôm not super-neat, but I like to keep my house tidy, although that may involve hiding some messes inside a desk or a closet when paperwork overwhelms me. I‚Äôm not going to be a meticulous person and I‚Äôm okay with that. But I could be a more thoughtful one.

They say the road to hell is paved with good intentions, but I don‚Äôt buy that. It‚Äôs paved with rationalizations and justifications, people‚Äôs attempts to believe that something bad might be good, just this once. The way I see it, good intentions are ephemeral. It‚Äôs nice to have them, it‚Äôs better to act on them. How to capture that in one word?

I settled on: EXECUTE.

Not a bad resolution for a crime novelist.