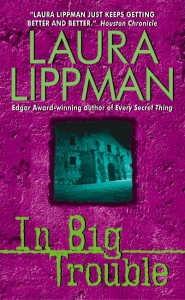 Tess Monaghan has learned the hard way how to survive on the streets of Baltimore—first as a fearless investigative reporter and lately as a PI. But a new case is about to take her way out of her element.

What begins with a tantalizing shard of a newspaper headline—”In Big Trouble”—above a photograph of an old boyfriend will end far away in another world, where people dress and talk differently . . . and rich people’s games can have lethal consequences. Here where the sun is merciless—and curiosity can kill faster than a rattler’s bite—Tess is going to have to confront her past and, hopefully, live to tell about it. For the answers she seeks about a man she thought she knew may be somehow linked to a murderer who two-steps to a very deadly drummer.

New York Times bestselling author Laura Lippman burst onto the crime fiction scene with her critically acclaimed suspense series featuring Baltimore p.i. Tess Monaghan. In Big Trouble is classic Tess, a case that draws the intrepid investigator from Charm City to Texas to help an ex-lover in peril. Lippman’s novels have won the Edgar, Agatha, Anthony, Shamus—every major award, in fact, given for American mystery fiction. In Big Trouble is a prime example of the storytelling artistry that has won Laura Lippman the admiration of critics and peers alike, from Tess Gerritsen to Harlan Coben (“I love her books”).

14 thoughts on “In Big Trouble”