I’m a big believer in recycling — newspapers, bottles, speeches. In fact, I recycled that joke, such as it is, from a speech, which I gave to the Mystery Writers of America Mid-Atlantic Chapter in late May. On that occasion, I had been planning to give a talk I had for the Maryland Library Association earlier in the month. I changed my mind at the last minute, figuring that MWA members didn’t need to be convinced that genre fiction is worth reading. Instead, I’ve decided to reprint it here, edited slightly.

A little background: It turns out that I am the first-ever genre writer chosen as the Maryland Author of the Year by the MLA. The committee — bless them one and all — decided it should include popular fiction in the mix. More endearing still, they actually did a little reconnaissance, going to hear me speak at the National Press Club last summer, about two months before Every Secret Thing was published. But I knew none of this until the MLA convened in Ocean City on May 6th. Anyway, here’s what I said:

Until Monica [McAbee, one of the committee members] mentioned the fact, it had never occurred to me to wonder if other genre writers had been honored by this esteemed group. “Ouch,” said a friend, as if I had been insulted, but I considered it quite an honor. I am a genre writer and proud to be one — prouder still to be the first crime writer chosen by the MLA.

Still, this did seem an ideal opportunity to talk about the place of genre in fiction — and in libraries. Some background: I began my publishing career by writing what are called paperback originals, books that appeared in mass market format. A partial list of writers who started this way includes Elmore Leonard, James Ellroy, Lawrence Block, Harlan Coben and Lisa Scottoline. It is a canny strategy. For one thing, pbos, as they are called, are a category unto themselves for several awards, and those awards can give new writers a boost. Better yet, book-buyers are more likely to take a flyer on an unknown in paperback than in hardcover. Mary Alice Gorman, who runs Mystery Lovers Bookshop in Oakmont, Pa., once told me the entire staff can endorse a first novel in hardcover, swearing it’s better than sex and chocolate, and customers then say they will consider — consider, mind you — buying it.

On the other hand, a paperback costs less than most people spend on lunch on an average day, so by the time Morrow began publishing my books in hardcover, I had a nice fan base of addicts. You see, series fiction is the crack-cocaine of publishing: You get readers hooked at a low price, then mark it up steeply.

But because my first four books were paperback originals, and mysteries at that, I was often asked by well-meaning friends: When are you gong to write a real book? I was confused. I thought the neat pile of paperbacks growing on my shelves were real books. They had covers. They had ISBN numbers. What made them less than real?

It is, I think, the nature of the human condition to make the world more manageable by dividing and subdividing. We learn, when we’re very young, to start making the ultimate distinction - Like Me. Not Like Me. Like Me. Not Like Me. Those of you who have read Every Secret Thing might remember a scene in which Ronnie Fuller, a young woman who is still trying to live down a literally fatal mistake of her youth, is remembering a magnetic alphabet board she played with as a child. The letters came in color groups — pale blue, orange, red, green and black — and the young Ronnie had inferred a complete society in that board. The pale blues, A-F, were the cool kids; G-L, orange, were the earnest grinds, and so on. That was my alphabet board; that was my take on the colors. And the story of Every Secret Thing is really the story of a group of people who cannot stop making those distinctions all the time, with dire consequences. Those who fall in the “Like Me” category are accorded respect and empathy, while those who are Not Like Me are unfathomable, almost inhuman — and treated accordingly.

Some of the divisions within fiction are reasonable and helpful. Readers have clear preferences, after all, and trying to force them to read what they do not like does no one any good. Jonathan Franzen’s fans may never embrace Nora Roberts, and vice versa — which, in the long run, is too bad for Mr. Franzen’s bank account, not that it’s exactly suffering. But the insistent division on high- and low-art within fiction strikes me as helpful as a line drawn down the middle of a sandbox. Writers and readers can quarrel all we like about which side of the line we’re on, but the fact is our little sandbox is a tiny, precious oasis in a vast amusement park of pop culture, where much snazzier rides and games are entertaining the vast majority of customers. One of the bestselling novels of all time, The Da Vinci Code, was estimated to have five million copies in print a year after its initial publication date. If a major Hollywood film attracted a mere million people in its first month of release, it would be considered a disappointment. And a television drama with an audience that size lurks at the bottom of the Nielsen ratings. (Peyton Place, on the other hand, was purchased by an estimated 1-in-29 Americans in its first year of publication, in 1956.)

It has often been noted that politics are meanest where the stakes are smallest, and I think that’s part of the reason for the squabble that broke out in our sandbox when Stephen King was chosen to receive a special National Book Award. It was as if some implicit covenant had been broken — popular writers were supposed to be content with, well, popularity and the money it can generate, while literary writers reserve for themselves critical praise and the really meaningful laurels.

But the real battle among writers is one whose outcome we will not live to see: Writers, ambitious ones, are competing for immortality, for the one-in-a-million chance of producing a work that will last, that will be read 100 years from now, and not just by scholars. The forces that produce such longevity are not within any publishing house’s control, much less any writer’s. And so we spat among ourselves, forever nervous that the other side is winning.

But I would like to think that every writer wins when someone picks up a book, any book, and enjoys it. Genre fiction can, in fact, be stealth literature, books that lure people into the habit of reading. And this is where libraries come in. Because it occurred to me, as I was preparing this talk, that the library is one place where I have never been judged. I have had booksellers roll their eyes at me for some of my special orders, clerks in video stores smirk at the slight movies that I consider mental comfort food. But I can march into any branch of Baltimore’s Enoch Pratt and check out anything, and the only thing the staff asks is that I present my card and return the material within three weeks. (I confess, I often fail to meet that second standard.)

I know this is a crunch time for libraries, a time of shrinking budgets and subsequent hard choices, but I trust Maryland’s librarians to find a way to continue serving all tastes, high and low. And one way to do this is to use the best of genre fiction — the envelope-pushing work by writers such as George Pelecanos, James Crumley, Val McDermid, just three of my personal favorites, I could expand this list twenty-fold. Consider their work value-added two-fers, books that will satisfy those looking for nothing more than fleeting sensation, while also pleasing those who care about accomplished prose, social issues, and seamless storytelling. You know the old line, You can call me anything, just don’t call me late for supper? Well, you can shelve me anywhere — in fiction, under M for mystery, with books of local interest, in young adult — You can shelve me anywhere, just so long as you continue to shelve me.

Thank you again for this honor. 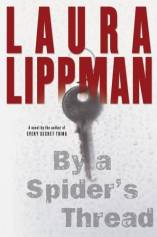 The launch for By a Spider’s Thread will be June 29th at — where else? — Mystery Loves Company, right here in Bawlmer, hon. Complete tour details will be posted here later this month. Should your hometown be missing, don’t despair. There’s an official tour, but also an unofficial tour, and the details of both are still being worked out.

Pre-publication reaction has been gratifying so far. Time Out New York describes the book as “pitch-perfect from the first page.”

I’m sure other reviews will be coming in this month, and I’m sure I’ll try to avoid reading them — and, yes, I’ll probably fail.