This summer, Beth and Jeff Tindall put an enormous amount of work into redesigning my website and integrating The Memory Project blog, which was housed at the wonderfully low-tech Journalscape site. The new site is gorgeous, the blog is easier to use and update — and I have been MIA pretty much since early September.

I’m not sure. In part, I feel as if I’ve moved into a beautiful new house and don’t have the proper furniture. It made me think about this favorite Nora Ephron piece, in fact. But the real reason is the Thing I Do Not Discuss. Except when I do.

Careful readers — those who pay attention to dedications, acknowledgments and the occasional interview — know that my life changed dramatically in 2010. With a fierce compartmentalization that will be really comical when you read my next book, I have otherwise tried not to discuss the change in my life. Here’s how I see it: The other party cannot grant informed consent. No one asked her if she wanted to sign up for this gig. And she is not, as far as she’s concerned, defined by being someone’s daughter. So, although there may be some photographs here and there, all uniformly unflattering of me, establishing that I sometimes go out in public with 20 extra pounds hanging off me, I am sticking to my resolution to keep that part of my life as private as possible.

The problem is, She Who Will Not Be Named is a time succubus. I have eight hours a day to do all non-Succubus related activities. Yes, I realize that’s a lot. I realize that’s what most people get, probably more. But I used to have sixteen hours a day to myself and it’s always hard to take a 50 percent cut in anything — money, calories, time. Something had to give. This blog was one of those somethings. E-mail, too. Any e-mail that requires more than “yes,” “no” or “bite me” is guaranteed to languish in the purgatory known as my in-box.

Personal hygiene has also taken a hit. Consider this a pre-emptive apology if you encounter me on a bad day. And the prizes awarded this August sit here in my office, still waiting to be mailed because I don’t have everyone’s address. Sad but true.

My life is also complicated by being bi-coastal, although the coasts are not the usual ones. However, we file this under RPP in my household and therefore do not complain about it. (Name that acronym in the comments and something cool might happen, although probably not in a timely fashion.) Finally, because there simply wasn’t enough going on, almost everything in my house started to break. The locks, the stove, the furnace/ac, the master bath, the toilets. The joists beneath the kitchen floor almost rotted through and we caught it only because the recycling bin wouldn’t stay closed and I happened to mention that to the contractor who was looking at the master bath.Turns out that defective flashing on the roof led to water piercing the stucco on the rear addition, which dripped into the basement . . .  It’s gotten so bad that people in my life are breaking now. OK, only one, and she’s on the mend. Knock wood, fingers crossed.

And yet, to quote one of my favorite ’70s novels — again, bragging rights to anyone who can name it in the comments section — it’s all gnats in the yogurt. Family is healthy, relatively, although I spent a recent night being the thing that went bump therein.  We can 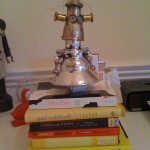 afford to fix what has broken. Somehow, the work is getting done. Treme (another topic we avoid around here) is filming in New Orleans, while I have managed to make my way, word by word, to the three-quarters mark in my current novel. The finish line is at least 20,000 words away, but the last section always goes the fastest because the possibilities have narrowed and destiny is calling.

Oh, and that’s another reason I was MIA: The work was going terribly and making me miserable. Here I am, on my 17th novel, and I have to learn the same lesson all over again: It won’t work until I put myself into it. For a long time, working on this book, I didn’t see myself. The main character, Heloise, is a high-priced suburban madam. (Again, she will be familiar to careful readers.) A single mother, she is worried about the future of her industry, overwhelmingly dependent on her childcare provider, and a fierce compartmentalizer who keeps her public and private lives as separate as possible . . . Yes, dear reader, it took me nine months to see how much Heloise and I have in common.

33 thoughts on “The Case of the Missing Blogger, or — Wha Happened?”