A few weeks ago, over on my Facebook page, someone asked me what Bouchercon was. I said it was a fan’s convention, put on by volunteers who love crime fiction. One of my loyal readers said she preferred to be known as a “reader.” I replied that I normally prefer that term, too. “Reader” is to “fan” as “crime fiction” is to “mystery” — broader, more general. Fans are readers, but readers are not always fans. But Bouchercon is a conference by fans, for fans — and the fans include the writers. (You should have seen all the writers slavering over Daniel Woodrell, myself among them.) 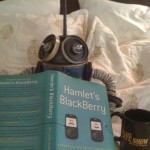 The robot is a reader and a fan

One of my favorite pieces of nonfiction, ever, is Roger Angell’s “Three for the Tigers,” to which I link here with some reluctance: I don’t like to give away anyone’s content, but it’s on Google Books and I like to think that anyone who reads it will go out and buy Angell’s books, which range from compendiums to a lovely memoir. The title for this entry is taken from Angell’s piece. Here it is in context:

“In this country’s long love affair with professional sports, the athlete has more and more come to represent the inamorata — an object of unceasing scrutiny, rapturous adoration, and expensive adornment — while the suitor, or fan, remains forever loyal, shabby and unknown.” These words were published in September 1973.

What’s so wrong with being a fan? Is it because the word derives from “fanatic?” (That’s not even 100 percent certain, based on my cursory Internet research. Sounds like a job for Roy Blount Jr.)*

Years ago, as a reporter, I decided to write a profile of a man who had made it his life’s goal to read 10,000 books. He kept a list of them, too. A person who is trying to read 10,000 books inevitably leads a somewhat quiet life, but that doesn’t mean it’s not worth a a thousand words or so in a newspaper.

So today, in support of fandom, I include a list of people of whom I am an unabashed fan:

6) Paul O’Neill (bet you never saw that one coming)

I’ve actually met four of the people on this list and stared mutely at two in restaurants. This is by no means a complete list, just what bubbled up to the surface. Feel free to add your own in the comments section and I’ll probably expand on mine.

24 thoughts on ““Loyal, Shabby and Unknown””