Writers are used to being asked certain questions. Do you write every day? Do you work on a computer? Do you outline? My friend Jan Burke once observed of the last question that the two camps regard each other with amazement. If one outlines, it’s hard to imagine how someone could produce work without that kind of orderly process; if one doesn’t outline, it’s hard to give up the intuitive stye that has guided one through previous books. I belong to a subgenre of the latter group. I outline after the fact. I know, what’s the point? But the outlines are intended to help me understand the novel’s pace. Is it suspenseful? Are things happening? If there are multiple POVs, are they staggered or clumping up, with one character receiving too much attention? Are there rests, for the readers and the characters? (If it’s all action, all the time, it can be a little numbing, at least in the type of crime novels I write.) 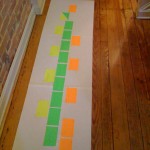 Generally, I produce these outlines when I’m feeling really stuck. That can come as early as the first half of the book or as late as the three-fourths mark. The more important thing is that the outlines are not text-reliant. They eschew words as much as possible as I break the book down into a series of colors and symbols. Then I step back and look at what I’ve done, my eyes searching for what’s wrong, what’s out of balance, what’s not working. I’ve talked about this approach at conferences and classroom settings. Next week, the Center for Fiction’s Crime Fiction Academy in New York City is giving me a chance to present a master class on the subject. I’m excited about this because I believe it’s truly helpful. The point isn’t to do it my way, but to open one’s mind to the idea that there are multiple ways to approach a work-in-progress. (A person with a background in musical theory could, for example, create a melody, but I don’t know enough about music to assign notes to individual chapters.) The class is free to the CFA’s students, but open — at a price — to anyone who wants to attend. You can find the information here.

One thought on “That Thing I Do”