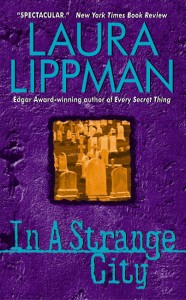 It is a treasured Charm City tradition. Every year on Edgar Allan Poe’s birthday a figure wrapped in a dark cloak visits the renowned author’s Baltimore gravesite and leaves behind three roses and half a bottle of cognac. No Baltimorean worth his or her salt would ever dream of trying to determine the true identity of the “Poe Toaster,” thereby possibly destroying a cherished ritual. That’s why Tess Monaghan refuses to help the odd, piglike man who wants to hire her to unmask the Visitor, who the Porcine One claims has deceived and cheated him.

If nothing else, the rejected client’s story has whetted Tess’s curiosity—and so the following evening she and her enthusiastic boyfriend, Crow, are braving the winter chill and the graveyard dark to observe the strange, beloved rite from a respectful distance. But on this particular January 19, two caped figures approach Poe’s resting place. One leaves the tribute and escapes into the night. The other dies there, felled by an assassin’s bullet.

Tess sees nothing that the other witnesses didn’t see. She isn’t working for anyone at the moment—and the homicide detective who caught this particular “red ball” is an old and dangerous nemesis—so it might be worth her while to avoid this case like the plague. But someone else wants Tess involved in the worst way. A stranger is surreptitiously leaving her roses and cognac and bizarre, cryptic clues—someone who knows Tess’s habits, someone who knows who she knows and where she lives. And suddenly home is a safe haven no longer.

Like it or not, Tess Monaghan is now a prime player in the murderous drama. And as the body count rises even higher, she uncovers links in a chain of greed, lies, false histories, and deadly acquisitiveness, a dangerously twisted mystery worthy of Poe himself.

2 thoughts on “In a Strange City”