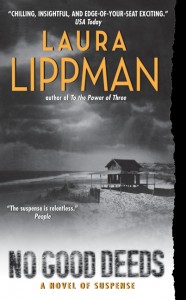 Working as a consultant for a Baltimore newspaper, p.i. Tess Monaghan seems far removed from the unsolved slaying of a young federal prosecutor—until her well-meaning boyfriend, Crow, brings a street kid into their lives, a juvenile con artist who doesn’t even realize he holds an important key to the sensational homicide. But Tess’s ethical decision to protect the boy’s identity no matter what could have dire consequences—especially when one of his friends is murdered in what appears to be a case of mistaken identity.

With federal agents threatening her with felony charges—and a killer threatening far worse—Tess couldn’t deliver the kid to investigators even if she wanted to once Crow goes into hiding with his young protégé. So her only recourse is to get to the heart of the sordid and deadly affair while they’re all still free . . . and still breathing.

2 thoughts on “No Good Deeds”