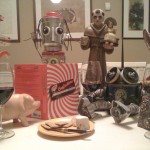 I have been grappling with a short story that centers on a children’s bookstore. (A Tess Monaghan story, by the way.) It has been slow going, but I trusted, as I often trust, that I would find what I needed to make it work. Today, a solution appeared: In the story, Tess keeps applying a lesson learned from a previous episode to the next episode, only to have it fail again. I realized this echoed a folk tale I have often cited, but not read in a long time.

IIRC — our motto! — I once went to a program in the basement of the Catonsville Public Library. I was just slightly too old for the stories and songs, so perhaps that’s why this ordinary afternoon stands out in my memory. We sang “John Jacob Jingleheimer Schmidt” and listened to a story about a dim little boy sent on errands by an increasingly exasperated mother. The illustrations were projected on a screen. I recall the boy as vaguely Germanic — Tyrolean hat with a feather, lederhosen. Those details could be invented, but I’m sure the boy was white.

Today, I decided I needed to read the full text of that story again because it was essentially the framework for the story I was writing. And given that my story centers on a children’s bookstore, it would make sense if that story was referenced. (After all, the story takes place on a series of Saturdays, against the backdrop of a weekly children’s story hour.)

First of all, I do not recommend that you plug the search string fairy tale meat boy store string hat butterinto Google unless you want to see some really interesting ads for lubrication. But the search actually yielded what I wanted — yet definitely not what I remembered, not at all, and it’s not just the absence of lederhosen. “Epaminondas and his Auntie” was new to me, the daughter of a children’s librarian and the terribly conflicted owner of Helen Bannerman’s “The Story of Little Black Sambo.” I found a second version of Epaminondas that “corrects” the original text, but the discovery of the story (no longer in copyright) was much more disconcerting than the results of my Google search.

Folk tales are universal; almost every culture has its version of the most popular stories. And the little boy does triumph at the end; it’s hard not to infer that his actions are very deliberate, that he’s taking advantage of his mother’s imprecise language.

Still — oh dear. And why do I still own the copy of the Bannerman book? I think it’s because I remember the terribly innocent child who read it, a child so innocent that when she first heard the “n” word at age seven, she thought it had something to do with a candy bar and repeated it sunnily to her parents.

Memories of beloved things that have become problematic, if you like.