So, apparently Amazon did something? I’ve been kind of busy, head down, eyes on my own paper, but I spent this weekend in San Francisco, a mini get-away underwritten by the Jewish Community Center, which was generous enough to let me tag along when my husband had an appearance there.

On Sunday, we walked about five miles, heading west from Nob Hill to Golden Gate Park, our eventual destination the de Young Museum. We stopped into shops that interested us. Inevitably, one of those was an independent bookstore, the Booksmith, on Haight Street.

Now, I pay pretty close attention to the world of books. I’m a writer and I’m a reader. I know what’s going on in “my” world. But in the Booksmith, there were several books and writers that were new to me. I assigned myself a task: Buy a book that you might not buy, were it not for being in this store. I read the “staff recommends” cards, picked up books and checked out the first line. (Yes, I really do that.) Some books beloved by the staff didn’t pass my first-line test, but they still introduced me to new writers. Eventually, I settled on Richard Hughes’s A Wind in Jamaica, with an introduction by Francine Prose. The book is not unknown to me, but all I know about it is that I should have read it. Also, this particular edition uses a piece of Henry Darger’s art for the cover and THAT is going to get my attention every time. 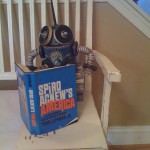 In the ongoing discussion about self-publishing on the web, one frequent assertion is that traditional publishers have acted as “gatekeepers.” Apparently, this is very bad, in part because they have kept out some good books and published some crummy ones, so they don’t deserve to be gatekeepers. But, beyond that, there seems to be a feeling that gatekeepers are un-American, that they’re trampling on people’s First Amendment rights, which include not only free expression, but the subsidy of that expression. And online booksellers are championed because everything is in stock, all the time, for less money than one pays in a physical bookstore.

But here’s the thing, speaking only for myself: I need a curator. (I also need an editor, but that’s a different discussion for a different day.) I want my choices to be culled. And I want to explore books in a world where serendipity is possible, where I walk into a store thinking only that I want to browse and leave with a book I might otherwise not have purchased. In addition to buying the Richard Hughes book on Sunday, I also picked up an illustrated copy of Michael Pollan’s Food Rules. Which I already own. But this is such a beautiful volume, I figure I’ll give it to someone.

I live in two cities, both poor. And while my life in one — essentially carless — makes Internet shopping inevitable at times, I’m aware that every Free Shipping! Deeply Discounted! No Sales Tax Charged! item I buy is taking money out of the local economy and sending it somewhere else.

I happened on this passage in the Michael Pollan book this morning: “With food as with so many things, you get what you pay for. There is also a trade-off between quality and quantity . . .” Look, it’s not up to me to take sides. I support all booksellers who support me. Amazon named The Most Dangerous Thing one of the top mysteries of 2012 and I was very grateful for that. But if a retailer is selling an item for less than it costs the retailer — well, what do you think the longterm strategy is?

127 thoughts on “What Bookstores Provide”